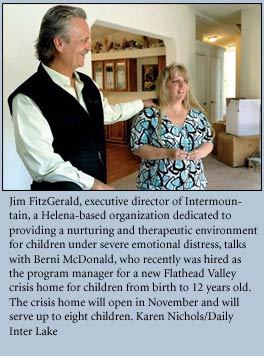 Jim FitzGerald, executive director of Intermountain, points out the irony that the Flathead Valley has several animal shelters but no place to take young children in crisis. But that’s about to change.

In November, Intermountain plans to open the doors of its new crisis home for children from birth to 12 years old. The location is kept confidential for the safety of the children removed from abusive or neglectful parents.

“This is a short-term crisis facility – that’s what the valley needs,” FitzGerald said. “It’s been a long and methodical process so it’s exciting to get to this point.” Flathead Youth Home serves a mostly older population of children 10 to 18.

Intermountain, a Helena-based agency, has served emotionally disturbed children for nearly a century. For about 10 years, the nonprofit has operated two treatment homes with Youth Homes through the Partnership for Children program in Missoula.

“I’ve had some 60 children in our home over the years,” she said.

McDonald has begun hiring staff for the house Intermountain has leased for 18 months with plans of building a permanent facility in future years. The building has space for up to eight children; children generally stay an average of 45 days.

“People ask why place a little child in a shelter as opposed to foster care,” McDonald said.

She explains that this temporary shelter supports rather than replaces foster care. McDonald said the facility provides social workers “a gift of time” to find the best longer-term placement if needed. Intermountain coordinates services with providers such as the Department of Child and Family Services, law enforcement, courts and community professionals. The agency also is opening an outpatient clinic in Kalispell with a psychologist to do evaluations and assessments.

“This is to lessen a lot of moves,” McDonald said. “Of course the goal is always to get children back with their parents.”

She added that the Flathead’s eight to 10 licensed foster homes may or may not have space or the ability to accept children when a crisis strikes. In the past, these children had to go to a Missoula shelter, adding community displacement to their trauma.

She, along with FitzGerald, provided a tour of their nurturing environment designed to mend the hole in the local child safety net. They began in the master bedroom now outfitted as a nursery complete with cribs and even a diaper wipe warmer.

This resource in the new shelter addresses a particularly heart-wrenching problem.

“It’s tough finding a home for infants when placement is urgent,” McDonald said.

Those emergency calls may come from law enforcement when an impaired parent with an infant has been pulled over and has no relatives or other alternatives to take over care.

Other babies come from the hospital where they entered the world addicted to illicit or prescription drugs. FitzGerald said these infants require intense, professional attention.

“My goal is that all the kids are safe,” she said. “These kids have already been through enough.”

Moving the tour into the main living room, McDonald said the area won’t have a television. Instead, she intends to have developmentally appropriate toys.

The home will have a television in the family room area at the end of the home for supervised viewing. McDonald said staff wouldn’t cut off television instantly, but would make a gradual change.

“We want to expose the kids to healthy lifestyle habits,” she said.

FitzGerald added that the Intermountain approach focuses on relationships rather than television in the home environment.

In that regard, the large kitchen with an island and room for a large dining room table provides the perfect area for children to sit down to meals and to sit in during meal preparation.

Many of these children have never experienced the warmth and security of an environment like this.

“It will be run like a home – they’ll get up in the morning, have breakfast and brush their teeth,” McDonald said. “We’ll go out and do life experiences.”

Both McDonald and FitzGerald decry the low priority reflected in the state budget to address this at-risk population.

A study done by Intermountain revealed that dog kennels in the Flathead charge an average of $18 a day for pet care. Yet Montana pays just $16.22 per day for care of a child between one and 12 years old. In contrast, Montana pays more than $70 a day per prisoner in state-run facilities.

“We as a culture no longer know how to set priorities,” FitzGerald said.

McDonald said the public has a huge misconception that foster parents make big bucks caring for children. In fact, the daily pay rarely covers even the cost to house and feed the children.

“Most of them show up with nothing,” McDonald said, requiring investment in clothing, school supplies, toys and other needs.

Compounding the problem, the state reimburses rather than advances payment. For this reason, Intermountain depends on its donors for the start-up costs of the new shelter and 25 percent of the ongoing costs of supporting the children.

“Once we have a kid in a bed, the government pays 75 percent of the actual cost,” FitzGerald said.

Unfortunately, those beds should fill soon based on statistics from last year when Montana social workers investigated 3,000 referrals.

“Of those, 800 came from the Flathead,” McDonald said.

About 100 of those investigations resulted in children separated from their families. Even though Missoula has a much larger population, the Flathead has just five less children in care right now. “They have just so many other services,” FitzGerald said.

For the past few years, Intermountain has worked to improve and expand professional services by sponsoring five trainings involving 300 families and professionals. The next one takes place Oct.31 and Nov. 1. “We’re bringing in a national speaker on adoption,” FitzGerald said. “She’s a world-class trainer.”

Intermountain charges a minimal fee for the sessions designed for social workers, law enforcement, educators and others involved with children. The agency’s donors may subsidize these trainings as well as the facilities.

People interested in supporting Intermountain’s work have an opportunity at the second annual “Calling All Angels Gala” scheduled for Dec. 13 at the Hilton Garden Inn. For information, contact Amanda Creamer at 888-261-6014.

The organization also accepts donations of goods for the new children’s home like the complete nursery furnishings provided by Debi Rolfing, who provides foster care to babies in Bigfork and Hawaii.

Rolfing also provided a decorator to help set up the home.

“These are people who have a heart for children,” FitzGerald said.

McDonald said she still needs a large dining room table as well as a van for use by the home.

Reporter Candace Chase may be reached at 758-4436 or by e-mail at cchase@dailyinterlake.com.