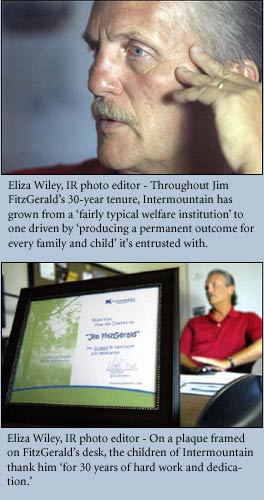 It was an out-of-place copy of the Independent Record that brought Jim FitzGerald to Helena three decades ago. And it’s been a tireless commitment to the abused, neglected and oft-times forgotten children of our state that’s kept him here.

Today, FitzGerald is executive director of Intermountain, an organization dedicated for nearly a century to providing a nurturing and therapeutic environment for children under severe emotional distress.

In 1978, the Los Angeles native was doing a construction job near Lima when he found a copy of the IR left in a truck stop. Intermountain was advertising for staff, and FitzGerald decided to put down his hammer and put his psychology degree to use.

He worked his way up from counselor to become interim director in 2001 and permanent director a year later.

Throughout his tenure, Intermountain has continued to add to available services — day-treatment programming in 1995; adoption and family-based services in 1998; a 1999 partnership with Youth Homes; and the opening of a psychiatry clinic in 1995 that serves some 275 children within a 90-mile radius of Helena.

Last year, at the invitation of the school district, Intermountain began a school-based service program, and this fall has five teams in local schools working with struggling kids.

Today, the organization serves 10 times the number of children it did in 1994, the vast majority from Montana.

“Thirty years ago we were a pretty typical child welfare institution,” FitzGerald said. “But not long after that we moved in a decidedly clinical direction. We’re driven by outcomes, driven by producing a permanent outcome for every family and child we’re entrusted with.”

The organization recently announced plans for a new crisis facility in the Flathead Valley — where, FitzGerald notes, there are seven animal shelters but none for children. That facility should open in November.

FitzGerald said that while the country has made progress in the decades he’s been in the profession, there’s still a need to change the way people view the children Intermountain works with, children who have been removed from their homes by the government and have in many cases suffered tremendous emotional abuse and trauma.

“Many people view those under the protection of the government as having some sort of moral failure,” he said. “We fight the attitude that these children are at fault for what has happened to them. If anything, we see the role of government is to protect its most vulnerable people. Society doesn’t understand the epic proportions of abuse and neglect that go on in our culture.”

Intermountain has around 32 resident children at a given time. They arrive at anywhere from 4 to 12 years of age, and the average stay is around two years. Too often, they’ve already been taken from their parents, lived in several foster homes and bounced from one authority figure to another.

“And at 5 years old it’s like living with Genghis Kahn,” FitzGerald said. “They might have 10 fingers and toes, but you have a brain that’s organized around anxiety and stress and chaos.”

Ideally, FitzGerald said, the child will be ready at the end of his or her time at Intermountain to “be welcomed by the world, to be welcomed by a family, to attend public school, to go to soccer camp, attend a sleepover, be a kid. To have fun.”

Intermountain took in $7.7 million in support and revenue last year, including $4.5 million in treatment fees and $1.4 million in private support. Its annual Festival of Trees is one of the most important events on the calendar and a remarkable display of Helena’s generosity, FitzGerald said.

It’s a difficult job to leave behind at the end of the day, but even after 30 years, FitzGerald doesn’t envision retiring soon. His tenure is among Intermountain’s longest, but the organization is built around people who have worked there a decade or longer, and the depth of institutional knowledge is striking.

“This is an organization that cultivates and develops people from within,” FitzGerald said. “Many of our people in positions of responsibility started in direct care. We have a philosophy, a way of seeing and understanding children, that rules the world here. Our culture puts kids first.”